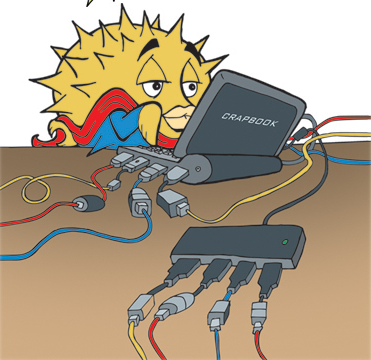 It is a common theme in the GNU/Linux community to tout the current year as the year of the linux desktop. Every year the same thing happens. The nay sayers nag that Linux is a tiny percentage of the desktop market and that Mac OS X/Windows is superior in so many ways.

What most people miss is that for the majority of users the year of the Linux desktop already happend. I myself can count at least 5-7 years where I used Linux exclusively and nothing else. That’s pretty much the definition of being the desktop. I don’t own a Mac or a Windows machine. I can do ALL of my work & entertainment (hello steam <3 Gabe ; hi netflix!) on it. Give it up Linux folks. You are already on the desktop :)

Personally I am waiting for my OpenBSD on the desktop year. It’s funny because two things happened recently. My wife promised me to make a double colored winter scarf for me. One color is for a day I used Linux and the other color is reserved for a day I only used OpenBSD. Current stats shows that since the start of this year I used Linux for 75 days and OpenBSD for 55 days. It’s a pretty head to head match and OpenBSD is loosing mostly due to work (like the Dart team not really cooperating to get BSD support) but I’m working on it. I already could use Linux (and did) on every day of the year without any exceptions. I will claim the OpenBSD on the desktop year when I can do the same with OpenBSD (and believe me I will try to make it happen).

The second thing that happened was a series of tweets on twitter. Referring 2016 as the year of OpenBSD on the desktop. Guess what. For some people it already arrived. I strongly believe that @risc started the series.

2016 year of the #OpenBSD desktop? pic.twitter.com/rM7jXH5z7Q

2016 year of the #OpenBSD desktop! pic.twitter.com/o9RRuw4VRQ

2016 year of the #OpenBSD desktop! pic.twitter.com/jsafgU9KS3

Really happy coding in #elixirlang on my #OpenBSD desktop! pic.twitter.com/qo5GtOSjtV

and what better way to define a OpenBSD desktop than a set of CD’s sitting on one?

It’s that time of the year again… #OpenBSD pic.twitter.com/UhoF4r7h9V

In the end. Yes. We might still be missing Netflix, Steam and some one off tools like the Dart language but for most of us. The OpenBSD desktop already is a reality.